This pedalboard came about because I wanted to create a multi-purpose board which could be used in a number of different live setups. A key aspect of this was the need to find space for a Musicomlab EFX III MIDI loop switcher, which couldn’t possibly fit on my existing PedalTrain PT-2, hence the move to a larger TrailerTrash board. From memory, I think I started putting this board together in May 2011 and it was completed by mid-June 2011.

The board was designed to deal with three live scenarios, built around the Musicom EFX III:

This is a TrailerTrash Pro Series 28″ x 16″ board, supplied in a soft padded case and purchased from GuitarGuitar in the UK. These babies are not easy to get hold of in Europe, so buying from the UK was my cheapest option.

This one was supplied with a “hook” fabric covering the main surface of the board. However, as I prefer to run power cables below the board, I replaced the surface material with a 12mm MDF board. As I already had a pedal layout in mind, I then drilled various holes in stragetic places in the board to allow me to run the power cables from the power supplies (mounted below the board) to the pedals. I then covered the MDF with sticky-back “treadplate” style plastic, before mounting the board panel back into the TrailerTrash metal frame.

The power supply requirements were a pain thanks to the Blackstar HT-Dual pedal which needs a whopping 800mA at 16vDC, and the two TC Electronic pedals, both of which need 300mA at 12vDC. Powering the Blackstar from any of the usual pedal board supplies, such as the Voodoo Labs Pedal Power 1 or T-Rex Chameleon Fuel Tank (which I happended to have lying around), was impossible. Therefore the only option was to use the Blackstar’s own power supply and run this one directly from the mains. 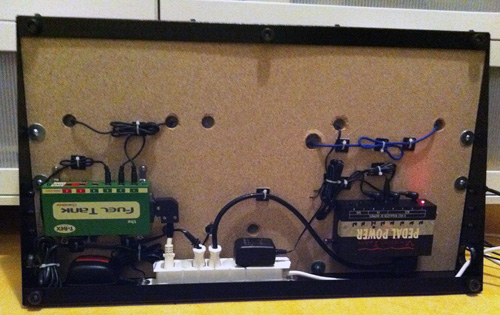 As you can see, I’m using two power supplies – a Voodoo Labs Pedal Power (original version) and a T-Rex Chameleon Fuel Tank. The Pedal Power is powering the “front end” loop pedals (see below), ie the overdrives / distortions, which only need 9v DC. The Chameleon is powering the FX loop pedals, ie the Nova Delay and Modulator, and the Providence Chrono Delay. The Blackstar HT-Dual is opwered direct from the mains, and you can just about see the Blackstar’s adapter fitted behind the Fuel Tank. Finally, I mounted a power strip to the TrailerTrash metal frame, screwed in place, to keep everything neat and tidy and in one place.

In signal chain order, the setup is as follows:

FX Loop (ie for those pedals which go in the amp’s FX loop):

Board wiring and interface

The interface was custom built for me by fellow Huge Racks forum-er, Casey Hanson. It’s a simple I/O box with 1 7-pin MIDI and 5 mono 1/4 jack sockets. The beauty of an interface like this is that I can then simply plug in my PedalSnake to the interface when setting up / breaking down the rig. Note that in the Dual Rectifier rig I only need 4 mono sockets. The 5th socket could be used for a simple channel switcher controlled by the Musicomlab, which I don’t need to do thanks to the RJM Mini Amp Gizmo in the rack, so including this socket was simply some advance planning on my part.

Interconnects are George L’s solderless cables/connectors. Although you will see critics of this solderless system, I’ve used it for years and not yet had a cable failure in use. I think teh key to this is (a) use a multimeter when making the cables, to ensure that the connection is properly made and (b) periodically (every few months) check that the plu caps haven’t loosened due to transportation vibration, etc.

Is it still in use?

Sadly (given the amount of time and effort expended in putting it together), it is no longer in use at the time of writing (December 2012).

Frankly, it was a huge board, most of which was redundant (ie the pedals) when using the Dual Rec / rack rig, heavy and just another piece of bulky kit to be loaded into the car. So, mid-2012, I decided to decommission the board, and switch to using different smaller boards (Pedaltrain Jr’s or PT-1’s) each configured for the scenarios mentioned at the top of this article. All the pedals have been kept (for the moment), the TrailerTrash board and case too. Who knows? I may well end building something similar in the future…